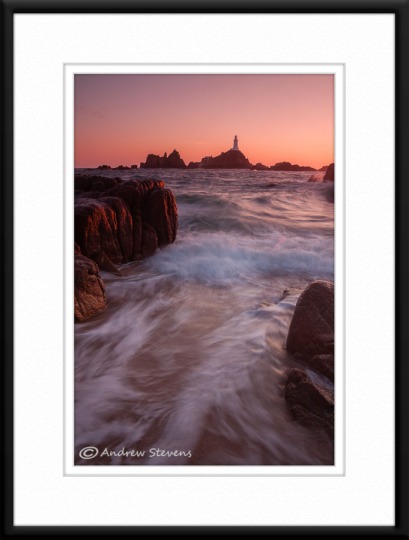 Ok, this isn’t strictly a “Latest Image” as it was shot in August, but I’m rather behind with my processing after a very hectic summer, so this could be classed a “Latest Processed Image”!

My in-laws live in Jersey, so we often visit the island as a family to catch up and take a break from things – well, that’s all things except photography!

As well as the catching up with family and friends, chilling out on the beach, enjoying good food and wine, a trip to Jersey just wouldn’t be complete without a photographic outing or two. And if I only have time for one outing, it’s normally to La Corbiere, my favourite lighthouse.

La Corbiere is joined to the island by a causeway, and is best visited during a rising tide so you get plenty of movement in the water, and rocks, sea, sky etc. Visit at low tide and you have a lighthouse and rocks; lots and lots of rocks.

On this occasion, despite the glorious evening and sunshine, there was no cloud to speak of, so the foreground would need to be the more important part of the image (we photographers are never happy, are we?!?!).

As the sun dipped, the sky colours started to warm up, so I started looking for rock shapes to guide us to the distant, and now cut off lighthouse. Moving away from the causeway, I found this gap in the rocks and thought it could work. The rocks were lining the edge of the frame quite nicely, the evening light was catching the rocks and the white water was forming patterns that could be used as foreground interest as well as a subtle lead-in to the lighthouse.

Now, if you’ve ever stood in coarse sand (and this is sand from granite, so very coarse) with waves bashing your feet, you’ll appreciate this isn’t an entirely pleasant experience. The waves were strong, and I was now almost knee deep in water! Each incoming wave pushed me backwards, while each receding tide tried to take my tripod and camera with it! I was literally hanging on to the tripod to a) keep my equipment above the surface and b) to keep myself above the surface!

I also had the problem of spray – lots of it! So, while trying to trip the shutter at the right time to get the effect I was after in the waves, I was also having to keep my equipment upright and constantly clean the filters with a cloth which hopefully wasn’t picking up sand! And with such a strong riptide rearranging the sand beneath my feet, I was having to recompose the image between each frame and wave – and all while checking my escape route wasn’t being cut off by the quickly incoming tide!

This might look a nice serene image, but it was quite a physically demanding capture!

Prints of this image are available from my website.