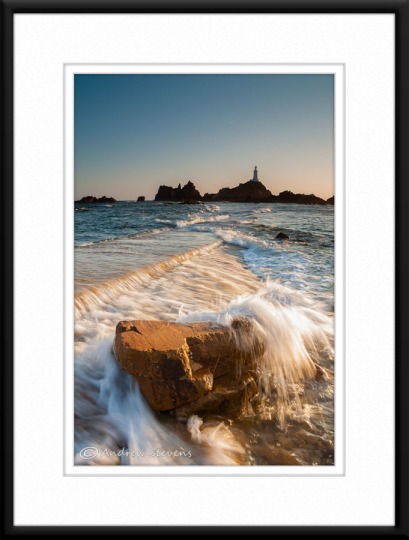 Taken on the same evening as Pink Tide, this was a far safer capture as the ground was mostly dry! Arriving just after the tide had turned, the sea was fast approaching, and the causeway disappearing again for the night. The sky was sunny, but clear, so I didn’t really have a sky to work with, so needed to find some story to tell and a foreground for my image.

I thought the causeway with rushing water would tell the story of the lighthouse being cut off at high tide, and wanted to show some of the danger that the lighthouse protects shipping from – big sharp rocks!

As the only photographer onsite, I had my pick of the landscape in front of me. My wife is a Jersey girl, and she had accompanied me for the evening so we could take in the sunset together – something we’ve not done for a few years (since the arrival of our son!), so we were very grateful to our relatives providing their babysitter service.

The base rocks here are quite flat, so the tide washes in quickly. This, combined with the slightly curving causeway, gives some nice wave patterns washing over the causeway. Hunting around for my foreground sharp rock, I found this beauty, positioned right by the causeway – perfect! Now to compose the scene…

Being a fairly straight structure, I used the causeway as a lead-in line, coming in from bottom-ish left, which is quite a classic composition, to guide your eye to the distant lighthouse. To properly tell my story about the rocks, I needed my foreground to be big, bold and bright. I originally tried placing the rock towards the bottom right, but that either put it partially out of frame, or small and insignificant within the frame, so I moved in closer to change the perspective, and exaggerate the scale.

Having played with different exposure settings in some test images, 1/15 seconds gave me a suggestion of movement in the water around the rock, while retaining the shape of the rougher water over the causeway. I wanted to make the foreground rock really prominent in the image so, having calculated the sky/foreground exposure difference as fairly minimal, I decided to use a 2-stop (0.6) so the background sky had less immediate impact, while the rock glowed in the foreground.

Now to time the shutter release to get the best movement/wave formation. I usually employ the Mirror Lockup function in order to minimise the chance of camera shake while tripping the shutter. This is great for static landscapes, but when you want waves in particular places, the extra 2 seconds delay proves prohibitive.

All I needed now was to get a series of waves washing over the causeway as another washed around my rock. This proved entertaining to my watching wife. I was standing right where the surf was reaching, so almost getting wet feet. The waves around the rock came that little bit higher, so I was in risk of getting very wet feet and shoes (is the 7th wave really bigger?!). I was stood with one foot on the base rock, and the other on a larger rock, slightly raised up; as each bigger wave came in, I lifted my left foot, transferring to my right, so the wave washed underneath before planting it back down again to steady myself and lifting my right foot just in case it got wet – all without my eye leaving the viewfinder!

After a few minutes, the tide was further in, the waves washed over with a bit more force, and I had my image!

Prints of this image are available from my website.